skip to main | skip to sidebar

How Joy Reid of MSNBC Became a Heroine of the Resistance - The New York Times
Posted by Sabrina Gledhill at 3:24 AM No comments:


Hunter Moore acted like he was invincible. He frequently cited the law that protects sites such as Facebook from being responsible for what users post. He taunted his victims. He encouraged his followers to mock them, to email their bosses, their co-workers, their families with links to their photos. What he hadn't counted on was the sheer, bloody-minded persistence of Charlotte Laws.
She spent weeks tracking down victims. She estimates that she has spoken to and helped well over 100 of them, victims of isanyoneup.com and a host of other sites. And when she'd done that she testified in support of a state anti-revenge porn bill and began work on getting a federal law passed. Kayla, her daughter, is trying to put the experience behind her and move on with her life.
But for Charlotte Laws there's no giving up now. "I'm always thinking about the next thing I can do. The next politician to try. It is very, very important that this is recognised as a criminal offence and that the law is changed."

Posted by Sabrina Gledhill at 5:58 AM No comments:

Antoinette Tuff: Meet the Woman Who Prevented a Mass School Shooting Yesterday
Posted by Sabrina Gledhill at 3:59 PM No comments:

BBC News - Noor Inayat Khan: The Indian princess who spied for Britain
Posted by Sabrina Gledhill at 5:45 AM No comments:

How Women Became Readers : The New Yorker
Posted by Sabrina Gledhill at 6:42 AM No comments:

One Billion Rising - the campaign to end violence against women and girls | guardian.co.uk

'I came from that kind of household where the male is a real bully': Ruby Wax – video | Society | guardian.co.uk
Posted by Sabrina Gledhill at 6:34 AM No comments:

The dystopia described in Margaret Atwood's The Handmaid's Tale is being played out on a daily basis today in several corners of the globe. The aim of this blog is to help keep track of real-life heroines and women's issues in general.
The main message: never take any freedoms for granted, no matter how small. 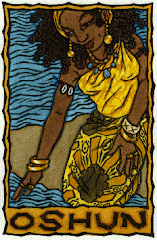 Warrior orisa, Yoruba divinity of the winds of change

"It would be an endless task to trace the variety of meannesses, cares, and sorrows, into which women are plunged by the prevailing opinion, that they were created rather to feel than reason, and that all the power they obtain, must be obtained by their charms and weakness."
Mary Wollstonecraft, A Vindication of the Rights of Woman (1792)

"We have to recognize that the price of equality in pluralism, like the price of liberty, is eternal vigilance." - Carl N. Degler